After the war between Ukraine and Russia, the sanctions, regulations, and processes have been obliged to change rapidly to adapt to new global conditions. As a result, along with states, many related institutions made substantial revisions for stricter controls, especially for virtual assets (VAs), and the revisions became more critical to comply with than ever.

The Financial Action Task Force (FATF), as one of the authorities on preventing financial crime and terrorism regarding Vas, updated its standards on the issue for virtual asset service providers (VASPs) in June 2021 and published a report lately. It extended the scope of regulations with Virtual Asset Service Providers (VASPs) referring to financial institutions like ATM operators, non-fungible tokens (NFTs), Decentralized Exchanges (DEXs), and digital wallets, as well as traditional players. The update especially became challenging for institutions other than banks because of the lack of a settled network between them to share information. Before examining the updates, It might be beneficial to gain insight into the previous version of The Travel Rule.

A Brief View on Travel Rule

At first, FATF just considered international and local banking transactions under the Travel Rule. However, it recommended a new guideline that is extended to include cryptocurrency exchanges in 2019. FATF briefly described it as a requirement that “VASPs and other financial institutions share relevant originator and beneficiary information alongside virtual asset transactions, therefore helping to prevent criminal and terrorist misuse”. If those institutions were willing to stay in the whitelist of FAFT, the regulations were compulsory, and they needed to collect personal identifiable information from both receiver and sender carrying through digital transfers with a specified threshold. Thus, it ensures the detection of suspicious transactions and enable to control and prevent money laundering or any other terrorist action. This FATF Travel Rule was applied by 37 member states as AML and CFT compliance additionally to their domestic laws, and it was expected to replace Know Your Customer fundamentals.

Report of FATF on Recent Status and Updates 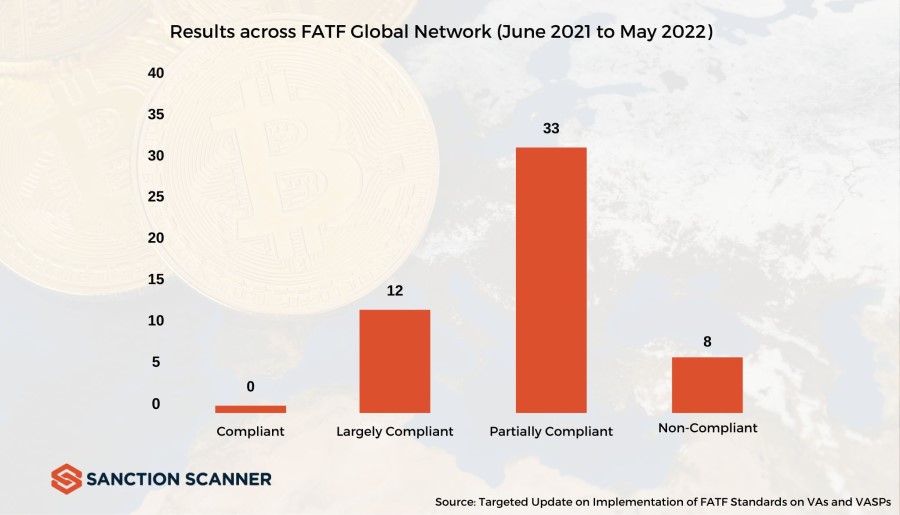 After three years of the Crypto Travel Rule’s acceptance, FAFT shared a report on the overall status and implementations according to regional bodies like Asia/Pacific Group on Money Laundering (APG), Caribbean Financial Action Task Force (CFATF), Eurasian Group (EAG), etc. In the report, this is generally mentioned that the results are more limited than expected. FAFT sorts their principal findings as:

• In the examination, this is clear that there is still a significant gap between the implementation of rules by states and FATF standards. Although the requirements have some suppleness concerning domestic laws like thresholds, it is expected to have closer regulations with the standards.
• Since June 2021, the implementations of the regional jurisdictions do not display a significant improvement. FATF indicates, “As of March 2022, while 29 out of 98 responding jurisdictions reported having passed Travel Rule legislation, only 11 jurisdictions have started enforcement and supervisory measures”.
• The results coming from private sector companies are more auspicious than governmental institutions’ results. They progressed the implementation of rules by developing new technologies providing to gather data.

In addition to the findings, the report updates issues in the light of observations in a year. FATF is concerned about Decentralized Finance (DeFi) and Non-Fungible Tokens (NFTs) sectors. Its updates include these points:

• According to data and jurisdictions, it is essential to heed Travel Rule standards for DeFi and NFT sectors because the possibility of criminal acts might increase with the rapid growth of these markets.
• Even though there is no standard to apply to software, people who control them could be held responsible under AML compliance.
• Together with financial entities, non-financial actors have come to the NFT market recently, resulting in a rise in the number of active wallets.
• Sanction evasion and ransomware are two of the crucial emerging risks for financial crimes. It is suggested that specialized technologies to face these risks could be helpful in preventing them.

Since the report shows that the implementation process went slower than necessary last year, the distance to reach the standards has grown. First, Jurisdictions should enforce Travel Rule on financial institutions in each country and keep track of them. The rules must be integrated substantially into domestic legislation for both the private sector and governmental organizations. For those that applied this initial step, using the latest technological tools could accelerate and make the next steps effortless. Actually, the continuing process is required two fundamental actions; gathering the right information and enabling determined others to reach them in specified conditions. Sanction Scanner APIs provide solutions to control transferring parties and the transaction itself. AML Transaction Monitoring tool allows VASPs to secure transaction processes by freezing and reporting suspicious actions. On the other hand, AML Transaction Screening help to control creators and beneficiaries by investigating global AML data.

Get in touch with our experts and Request a Demo to check AML solutions.